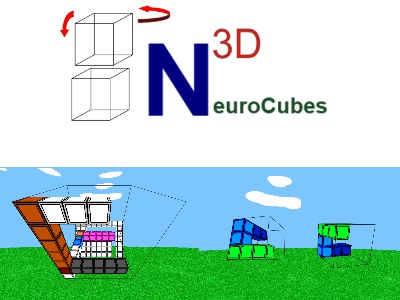 In our school we repeatedly experienced that insufficient spatial imagination is a big handicap for a technical education and in some cases even makes it impossible. To solve this problem we have developed an application which trains the spatial imagination and its different aspects. Our target groups are teenagers and adolescents. That is the reason why we implemented our idea as a game.

Our game does not contain only one main game but is rather divided into smaller modules. Every module trains a different factor of the spatial abilities. Each of these little games requires the generation of one or more three-dimensional objects. We created our own algorithm, which serves the purpose of creating such objects dynamically with a configurable complexity. Because of that we can guarantee that no object will be generated twice in a long time. Since our targeted group is young people we tried to maximize the fun while playing the game. We managed to do this by adding additional features, which should motivate and encourage the player, so that in the end is spatial abilities are enhanced. Highscores and Achievements are two of these features, which should manage to do this. The achievements can be different from game to game, but some are reachable through playing any of the games. After two correct objects the complexity and difficulty are raised by a certain level. This is done to keep the game exciting and challenging over a longer period of time.

To display the graphics with a stereoscopic effect we used NVIDIA-Shutter glasses and our own algorithm which we acquired by reverse engineering. This feature should increase the effectiveness of our application in addition. At the beginning of 2013 we proved the effectiveness of our game through a field test. We performed this field test with a total number of 30 students from two different school types (AHS and KMS). After we evaluated the tests we came to an amazing result. Neurocubes3D manages to strengthen the spatial abilities already after a short period of training.